US Stocks Recover on Good News

The US stocks recovered after declining for three consecutive days on the news that most of the S&P 500 companies have exceeded the sales and profit projections in the latest quarterly results. Another factor adding to recovery of stocks is that the data for jobless in US has declined to its lowest since 2007. On the other hand there is news of stabilizing of the Chinese economy, the second biggest economy in the world today and the largest consumer of raw materials as on date. With all these news there was a rally of 0.5 percent in S&P 500 which rose to 1699.40 whereas the Dow Jones Industrial Average gained 0.3 percent to reach 15,522.44 by adding 51.77 points to its earlier level. 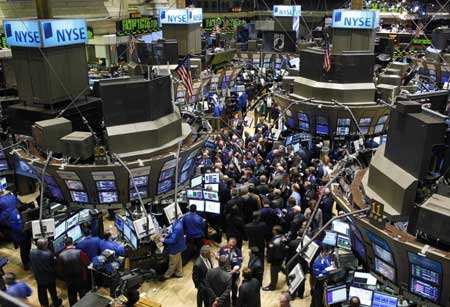 A major gain was noticed in some shares due to various reasons. Because of the rally in metal prices, the companies like Newmont Mining Corp. and Cliffs Natural Resources Inc. gained around 8.3 percent whereas the stocks of Tesla Motors Inc., the makers of hybrid vehicles, shot up by 17 percent after surpassing the estimates of analysts, in the second quarter results. The stocks of most phone companies fell in general but AT&T Inc. lost 0.9 percent during the trade. After reporting of JP Morgan Chase & Co. being under criminal investigation from Fed for its practice of sale of bonds which were mortgage-backed, its stocks took a beating of 0.8 percent.

The things moving in the right direction

The Global Market Strategist at JP Morgan Funds said in a telephonic interview that the market could see short term volatility but the data being moving in the right direction, it is ultimately a positive thing for the stock market. Though the S&P had lost 1.1 percent during the first three days of trading in the week because of the speculation that the Fed could curtail purchase of bonds in this year because of the strengthening of the economy and could also scale down stimulus because of the improvements in the labor market but it started showing recovery because of the better than expected result being declared by most of the S&P500 companies and also on the news that the number of jobless in US had declined to an all-time low since 2007.

After showing slowdown for two consecutive quarters, the economy of China, the second largest economy in the world today seems to be on recovery path. After the service-industry and official manufacturing indexes of China rose in July, a report showed that the imports and exports from China has exceeded the expectations of the economists and the Chinese economy could achieve the target of expansion by 7.5 percent.

The Index as well as stocks has risen

At Dow Jones, there has been a rally of 500 points by S&P 500 and has closed at a record level of 1,709.67 on 2nd August. Along with this the stocks of various companies have also rallied because of the better than expected results declared by these companies.